The last post on my Californian trip – finally? It was such a loooong trip of good food – and I think I have not lost all the weight I put on since California. This post continues from where the last left off and covers Palo Alto (very briefly) and San Francisco, the last city of the trip.

We didn’t plan to eat hummus originally – I’m not a fan (yes, gasp! the horror!) cos I generally don’t really like chickpeas. Consider me a changed woman since I’ve tried the deliciousness that is Oren’s Hummus Shop. While this revelation means that I’ve only tried subpar hummus in my entire life, it also means I won’t want to eat any other hummus unless its Oren’s. So. frigging. good. No wonder it was completely packed on a weekday lunch! We got a classic hummus to share as well as chicken skewers (soooo juicy) with some quick fried cauliflower florets. Everyone seemed surprised we were sharing (I suppose sharing food isn’t a big thing in the US…) but man, I’m glad we did. The portions were huge and we both left Oren’s very full and satisifed. Am going to try roasting my cauliflower with paprika sometime – the fried cauliflower was addictive and I could not stop. Do I wish I was sitting al fresco at Oren’s now, munching on some cauliflower? Hell yes. This is worth the return trip to Palo Alto alone.

We explored Stanford a little to try and relive our 18 year old dreams of studying in America (ok mine, not Tdy’s, who actually did an exchange in D.C.) and had to rush off in order to try and return the car to Hertz in San Francisco by 7pm. Let’s just say it’s the first and last time we’ll drive in Downtown San Francisco. It was horrible, everyone was rude AF, there were a lot of one way streets, we got lost and couldn’t find the parking garage to drop off the car – only managed to with help from the kind doorman at the Marriott.. which was why dinner was hard-earned and well-deserved (for Tdy who drove all the way, anyway)! 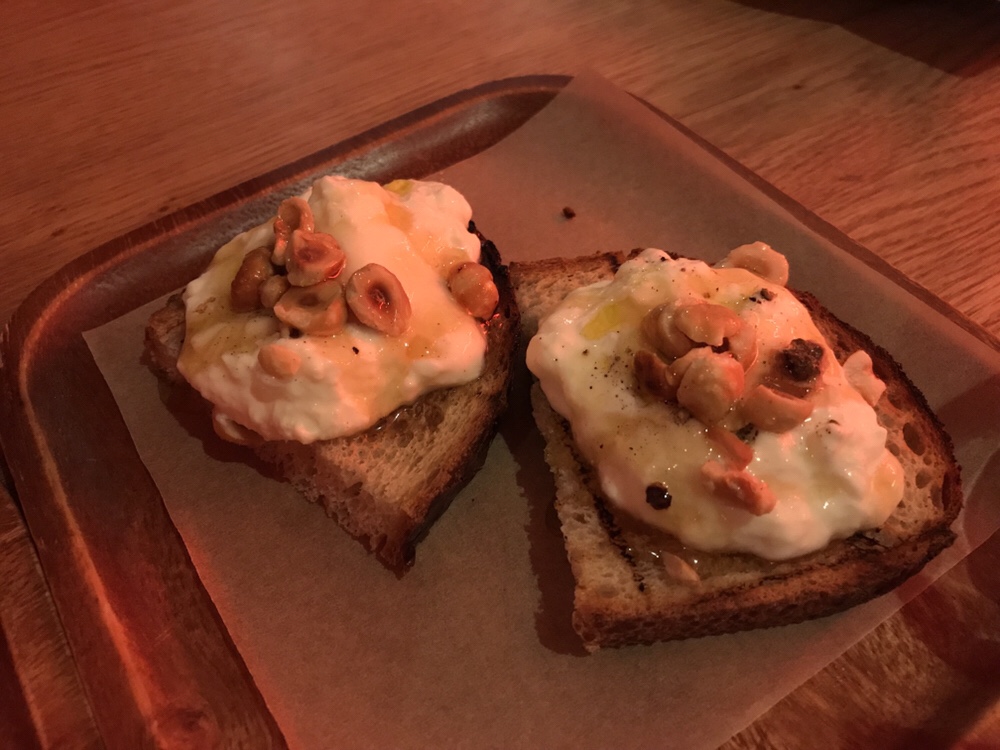 A quick Yelp led us to Delarosa. Normally we hate these sort of spots – crap lighting and super noisy – but having travelled the entire day and seen the menu online, we decided to stay on, and we were both glad we did. The burrata walnut honey toast above was almost a life-changing experience (trying not to be dramatic here so.. almost). Who knew adding honey to burrata would be such a game changer?!! It was sweet and creamy and the toast was a tad charred.. so simple, but so, so good. Shows that using good ingredients is all you need.

Homemade crabmeat linguine: hands down, best dish of the night. Yes, we preferred this version to Bestia’s. I think it had to be due to the copious amounts of garlic and white wine in the dish. I liked that freshly made egg pasta was used and it was not overcooked! This would be an excellent supper dish, and next time (if there is a next time), I won’t even share it.  We also got a side of brussels sprouts to share because we needed to feel healthy (and because everyone on Yelp said to get it). Not sure how fried brussels sprouts with aioli are in any way healthy, but hey, at least it’s a vegetable, and a really good dish at that. Could not stop eating. If only brussels sprouts weren’t so overpriced at home!!

One of the things I like doing before I go on trips is to surf instagram to see what local foodies are eating – and vive la tarte popped out in my discover page one day. Jazzed up croissants that are as yummy as they are pretty?? Of course I’m in. I read like a bazillion reviews on vive la tarte before deciding to go there but I kept my fingers crossed that the croissants would taste good (and it won’t be like my cronut experiences, ugh.)

I AM PLEASED TO REPORT THAT THEY WERE GOOD!! The pastry cream was light and never once overpowered the croissant. However, I do think one croissant is too much for a single person to share – all that sugar! Croissants were sufficiently flaky, never soggy – benefits of having dry weather eh? Don’t remember the key lime pastry cream being tart, it was a little sweeter than what I prefer in a citrus cream BUT that said, taste wise, the entire croissant worked and I enjoyed it. This is a dessert that looked as good as it tasted (unlike a certain mochi croissant which I had lately, so pretty but so fail in taste). 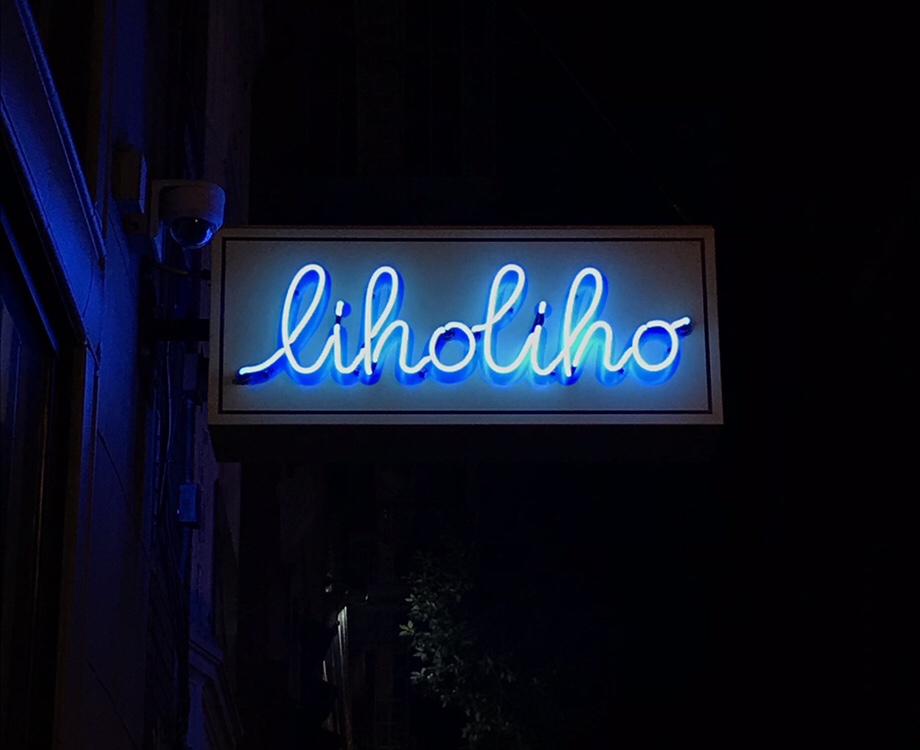 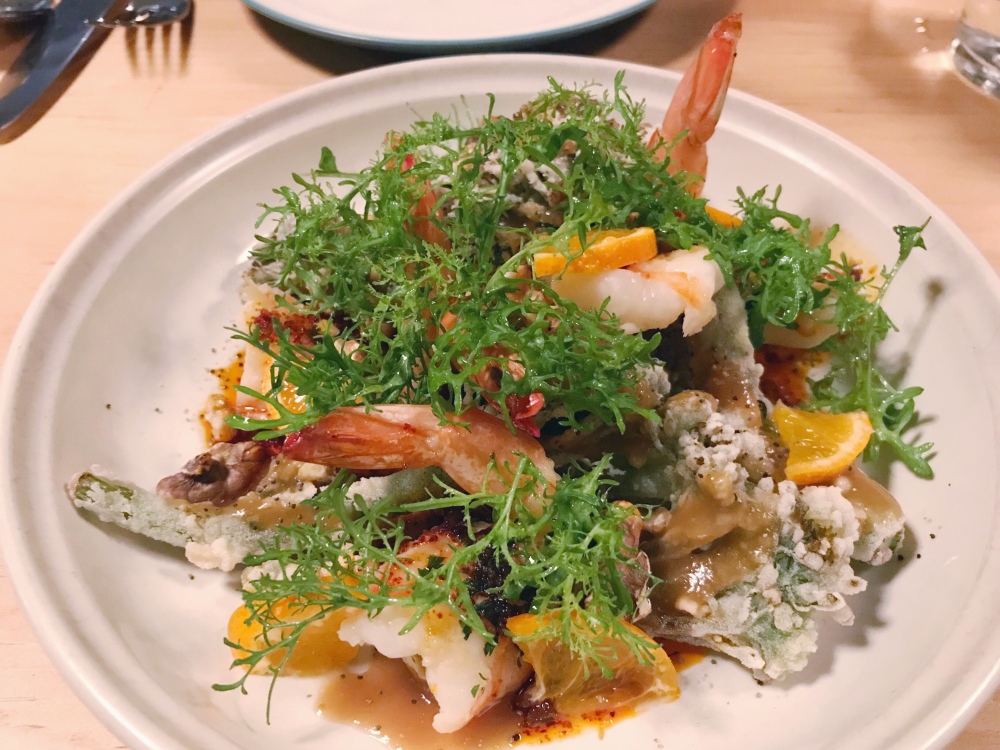 One of the highlights of our trip was Liholiho Yacht Club – I had to pencil in a reminder into my schedule to book a dinner time slot I wanted, one month prior to my desired date of dining. I am pleased to report that this is a GREAT spot and I thoroughly enjoyed the food. It’s my first brush with Hawaiian food, which actually looks like it has massive Asian influences. Case in point: kimchi beef tongue in poppy seed buns; and shrimp with tempura broccolini in a spiced orange glaze (see above). 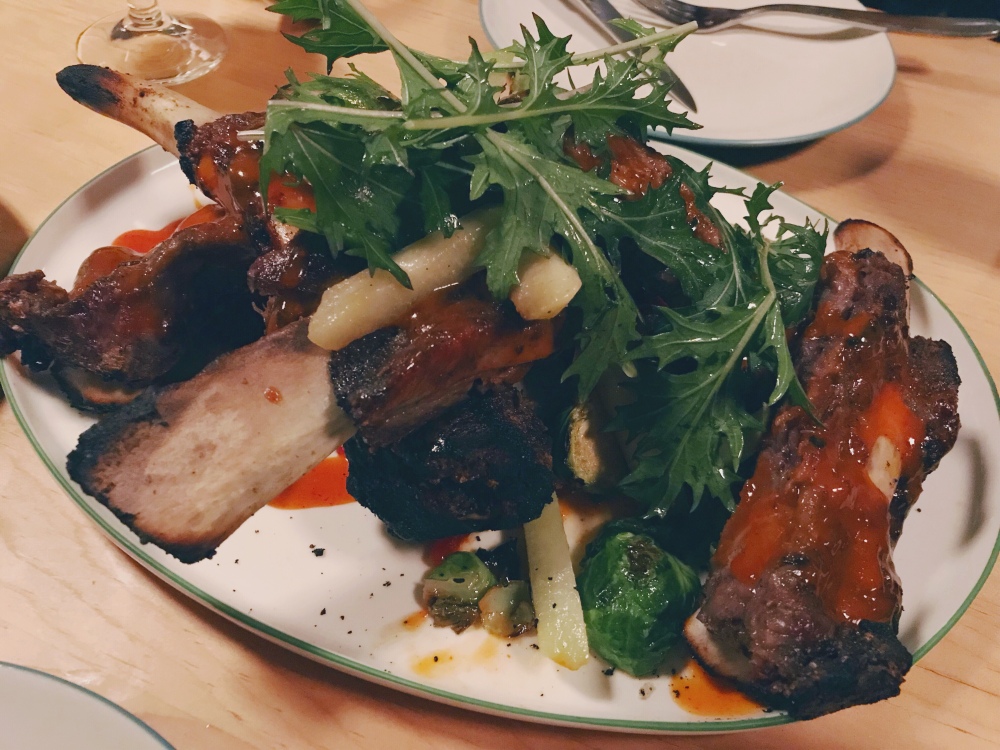 Pictured above: the slab beef ribs, kimchi chili sauce, kohlrabi, brussels sprouts, miso butter, pickled onion. Have I not mentioned that the portion sizes here are HUUUUUGE? Well, the ribs were the largest ribs I’ve ever been served and I know my phototaking skills are horrible, but that plate was bigger than my face. We could only finish one rib each and had to doggybag the rest home… and it tasted even better the next day. Tdy isn’t a fan of kimchi at all as he doesn’t like fermented foods, but the chilli sauce and miso butter were really harmonious here (and he really liked this!).

Of course, dessert. I wasn’t gonna leave Liholiho without trying their signature Baked Hawaiian. It’s like a baked alaska but with caramelised pineapple ice cream inside – ergo, it’s better than a baked alaska!!! I generally don’t eat pineapple as a fruit, but I am a sucker for pineapple soft serves and ice cream – gotta blame disney for this. And this? I was so full but I had no regrets ordering this. What a way to end an already wonderful meal at Liholiho.

To be honest, I’m not exactly sure what I can classify Liholiho’s food as – is it true Hawaiian or a chef’s interpretation of Hawaiian flavours? Whatever it is, I really appreciated the crazy bomb ass mix of flavours – Japanese, Korean, Chinese and… American? I don’t want to call it fusion because I think it transcends fusion and is in a true class of its own.

And that’s the end of my USA diaries! It has taken me long enough to post this last part, so thanks to everyone who has waited patiently, and encouraged me to keep going. Will be posting more regularly from now on as I think it’s time to devote more energy to Tummytay now that I’ve actually spent money to get my own domain! Thanks for your support throughout the years, my friends and smattering of readers; Tummytay OUT.

Read the rest of this series: