In all honesty, the main point of this trip was to go to Disneyland to celebrate my birthday – it’s been a while since I’ve visited the Anaheim one (the last time I went was 11 years ago) and I thought the original Disneyland would be a good first Disneyland for Tdy, who has never been. YES, I HAVE MADE IT MY LIFE’S MISSION TO ENSURE TDY LOVES DISNEY AS MUCH AS I DO.

We decided to drive down to Anaheim the day before and to stay the night to be able to enjoy a full day at the park. We stayed at Hampton Inn which I would highly recommend! It was very reasonably priced and the room was massive, the daily breakfast, decent. Guests at the Disneyland hotels get an hour’s worth of playtime in the park before general admission ticket holders are allowed in – this obviously makes reaching the park prior to the rope drop absolutely essential, if you don’t want to be stuck in snaking queues all day long. That, and planning your Disney route strategically. 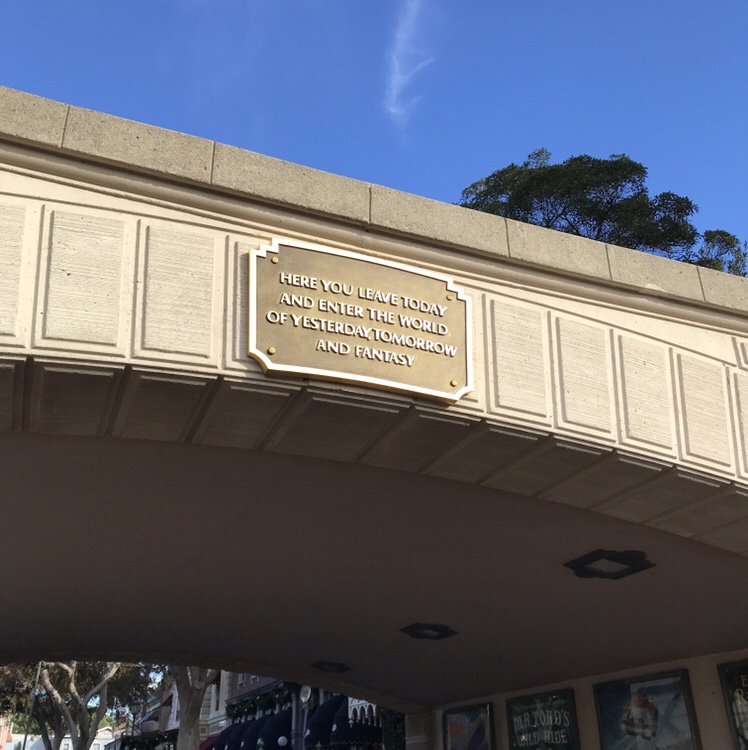 We started the day getting a fastpass at Space Mountain, then queued for Star Tours: The Adventure Continues, a simulation ride that has been updated with new Star Wars characters. I won’t spoil it, but it is a massive upgrade! While Star Tours has been a reliable favourite of mine, the new upgrade cements it as one of the best rides in the park (if you’re a Star Wars fan). Also, we noticed throughout the day that this was a 25-35 min wait. We waited for 15 minutes. This was also Tdy’s favourite ride, because well, Star Wars. 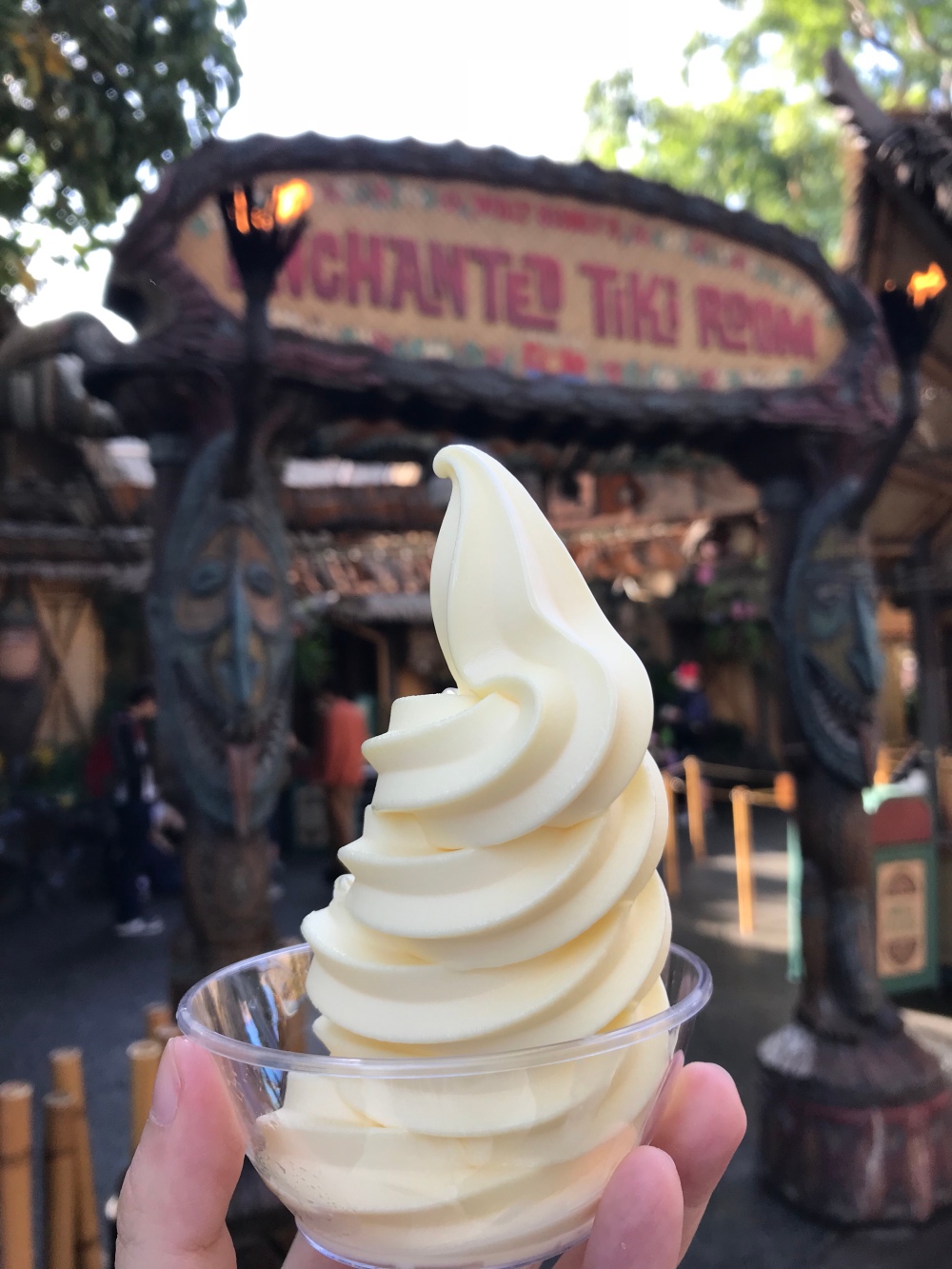 Being on holiday… I… had… soft serve at 10am in the morning. No regrets there – I only regret not ordering the dole whip float later in the day as I decided to exercise self control (Why do I even bother). Dole whip is a Disneyland classic pineapple soft serve. Even pineapple haters should give this a chance.  Nick, Tess and I had it for the first time when we visited Disney World four years ago, and we keep talking about it ever since. 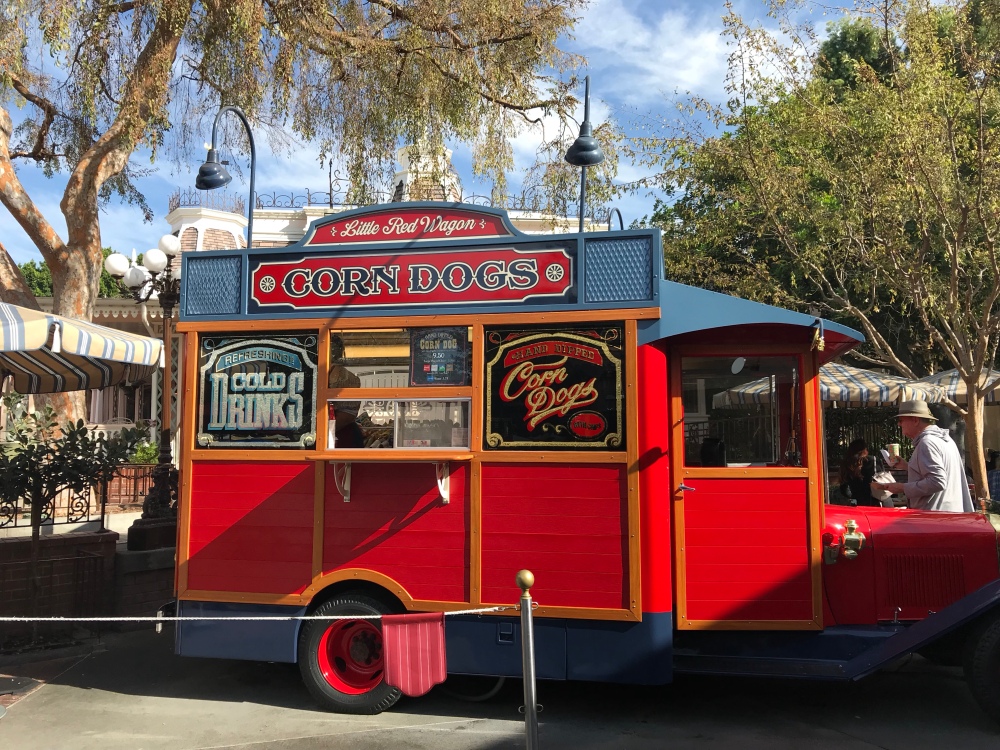 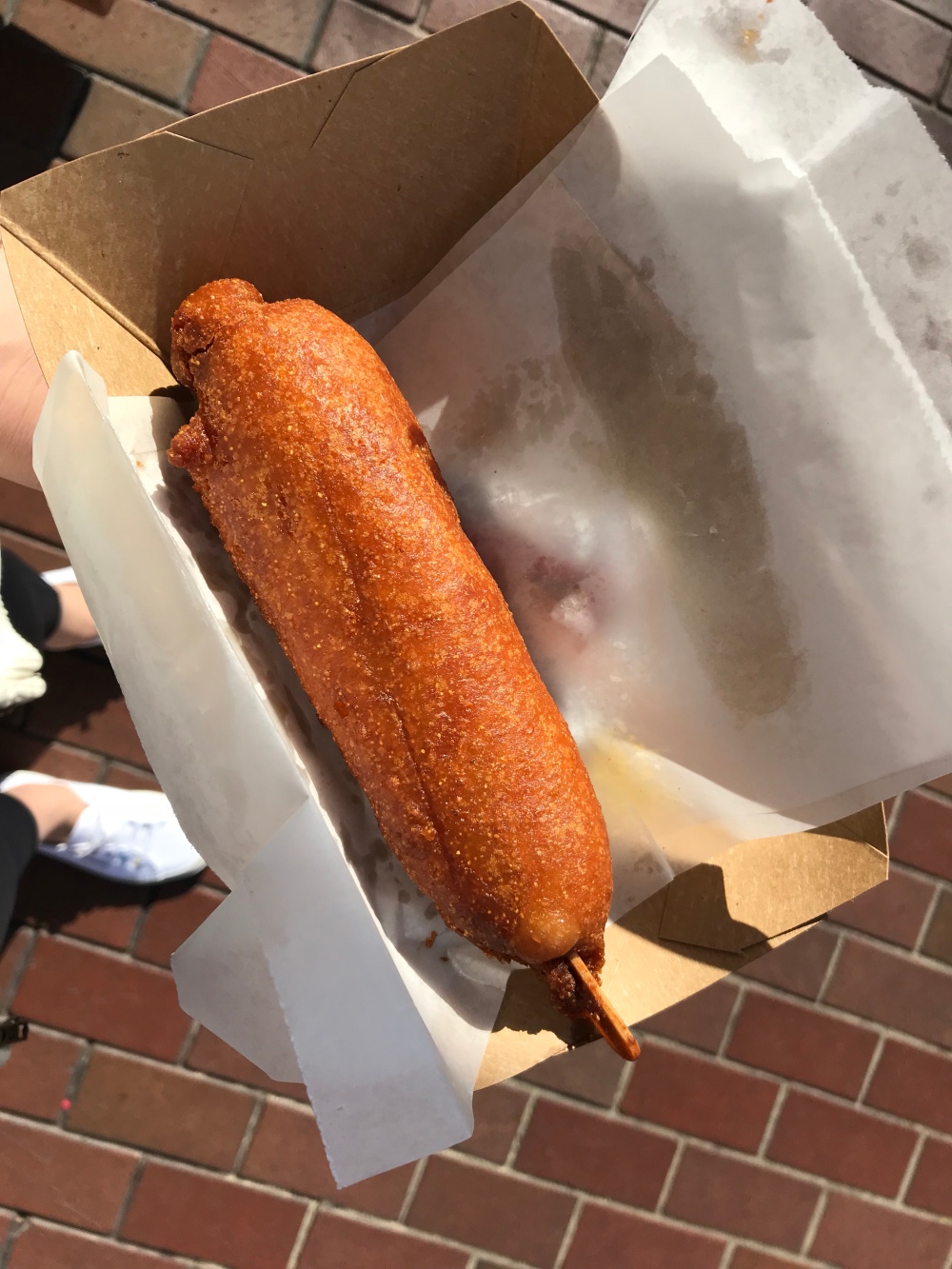 Also, had to make a stop at Starbucks because ‘murica. Once we got past the insanely long queues, there’s actually quite an array of drinks to choose from. I got a peach white tea infusion which was yummy (i.e. not too sweet) and erm, instagrammable. We also got the Disneyland classic corn dog to share. It’s expensive at about US$7 per pop but it did live up to its hype. Freshly fried doughy goodness – am with the disney food blogs on this one!

Another favourite of ours this trip was also Haunted Mansion Holiday, a standalone ride in a mansion which had been revamped for Christmas. The attention to detail was incredible, and it really isn’t as scary as it sounds; it’s more amusing than anything. Absolutely loved it.

We left the Disney parks early to return to freshen up for my birthday dinner at Napa Rose.

Napa Rose serves up American cooking, omakase style. Diners are asked three questions before dining. 1) Any allergies; 2) What food does the diner dislike?; 3) How would the diner like their steak done (assuming that there is a steak course). Tdy responded with no raw food, and no fermented foods (like kimchi) for (2) and I responded with no cheese, lamb and peas for (2). And now, to sit back and see what the chef decided for us!! Behold: 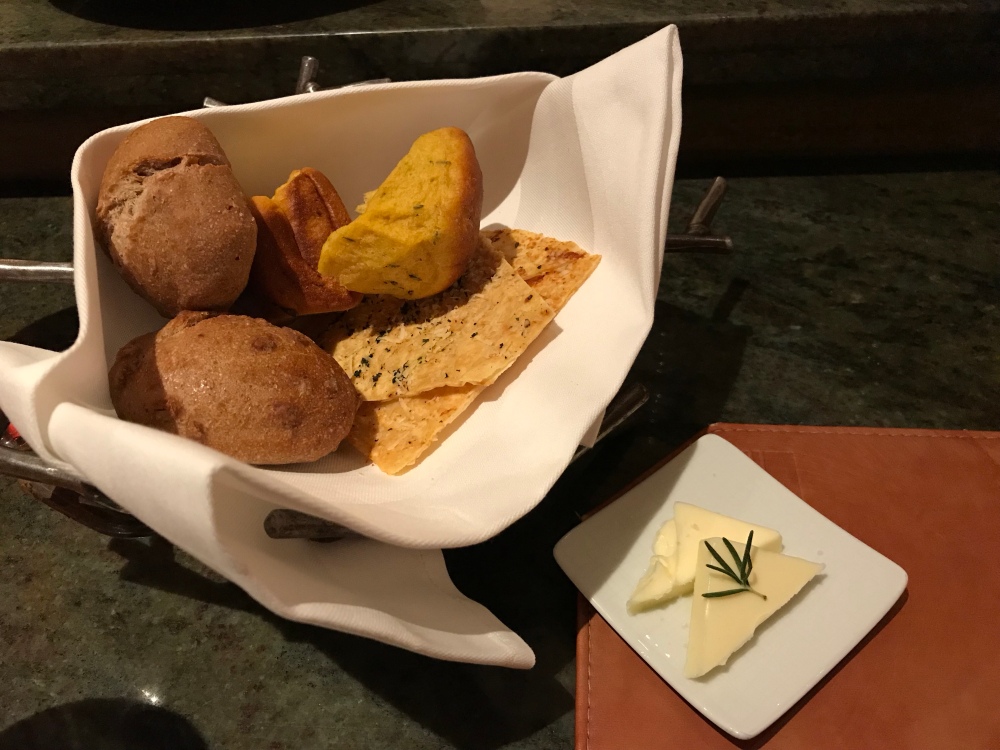 The amazing bread basket, which we had to control ourselves from consuming it all. The cheese cracker and the sun dried tomato buns were excellent.

First course: fish soup with san marzano tomato broth, calamari and mussels for Tdy, trout with brussels sprouts for me. I slightly preferred his dish to mine but I’m generally a very broth-y person.  My fish was cooked perfectly, still pink, flaky and not dried out. This was a good start, though I did wish that there was more broth! 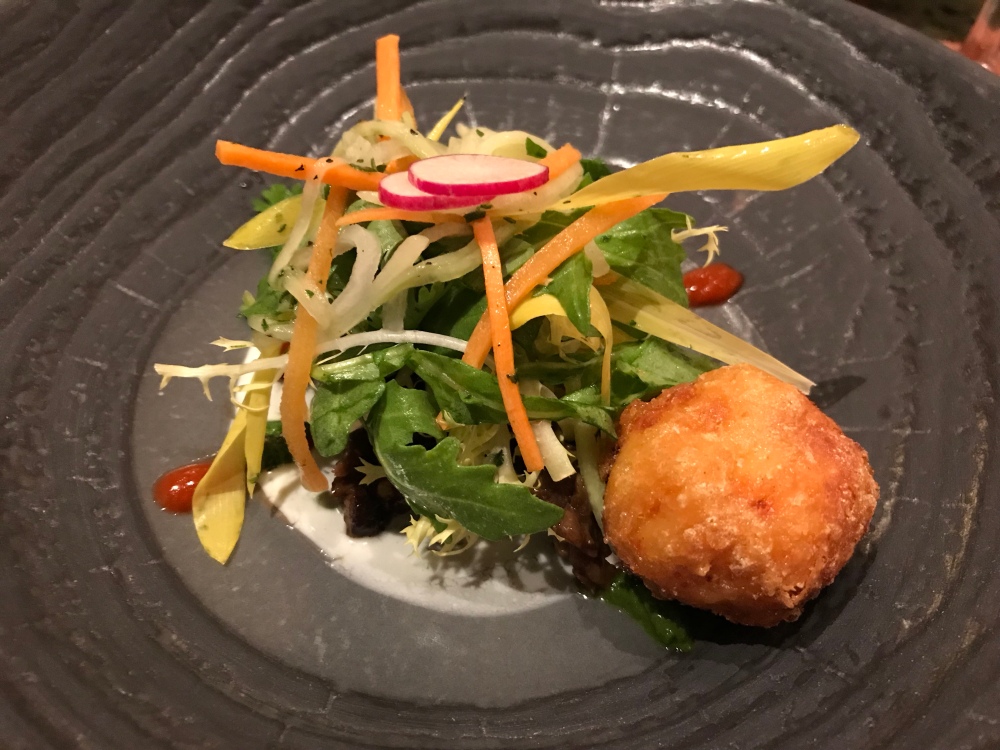 Second Course: Cured hamachi salad with avocado for Teddy; Double tiger salad with beef and lobster fritter, sriracha for me. We were surprised that Teddy got the cured fish dish while I got the beef salad because he did say he didn’t like sashimi. That said, he really enjoyed the cured hamachi with avocado and says he would eat it again. As would I. It wasn’t very special though – it’s like a reinterpretation of ceviche. My tiger salad was very Vietnamese (I think stir fried beef in salad is always a winner – reminds me of the hot salads I had in uni), and I enjoyed it. Not a fan of the lobster fritter as it was too oily.

Third course: duck breast with butternut spaetzle for Tdy, some kind of pasta with pork and mushrooms for me (Lol I was falling asleep at this point in my meal tbh) 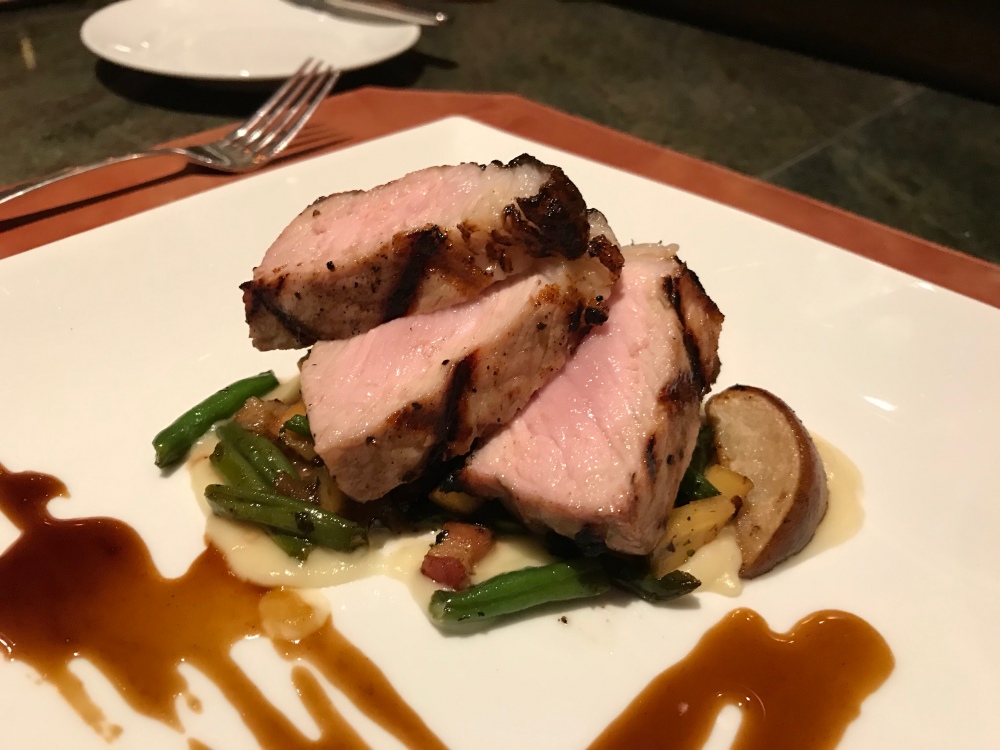 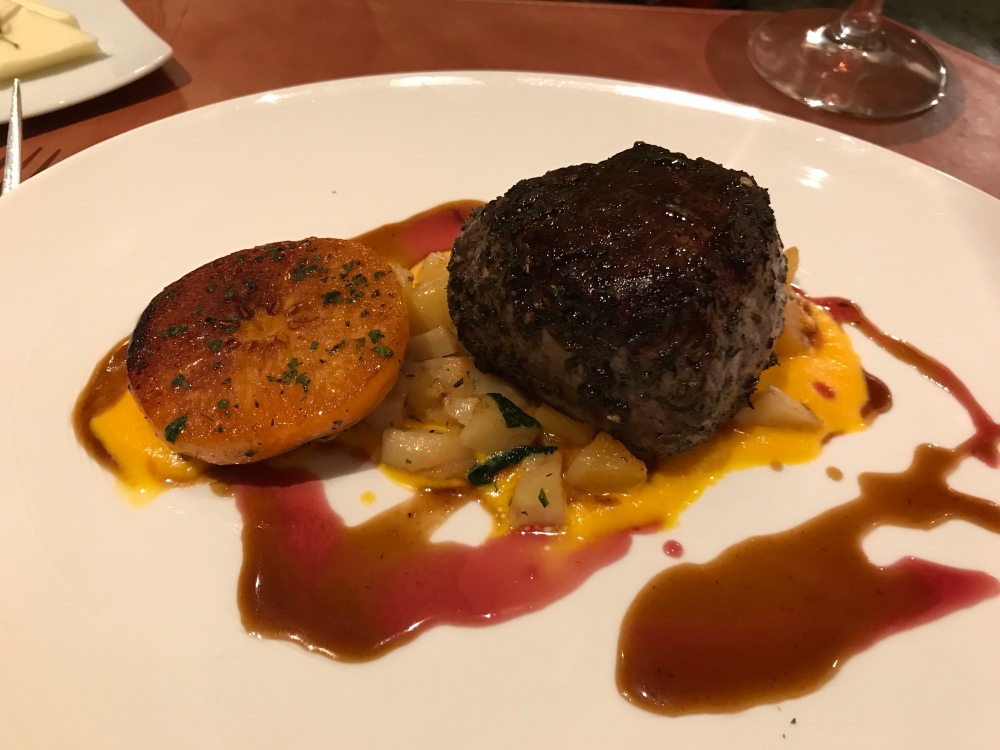 Fourth course: pork for teddy, tenderloin with huckleberry reduction for me. Unfortunately, the beef was overcooked and tough and I was, by this point, too sleepy to raise it to them. What we both really liked was the grilled persimmon though – we both had not had anything like that before.

We both ended with a peanut butter slice. Not bad but it’s not something I would eat again. The entire meal was US$100 per person (excluding drinks, tip and tax). If you consider the amount of food you can get from this, I think it’s quite good value but the extras do add up. Would I come back? Maybe. While I think it’s nice for a special occasion / date, and there just aren’t that many “special occasion” places in Anaheim, I really can’t say when I’d be back in Aneheim. The Star Wars themed land is slated to open in Disneyland in 2019 and that sounds really exciting, but as of now, the rest of the park seemed a bit.. tired. It was definitely a far cry from the Tokyo parks (which are, by far, the best Disney parks in the world; Disney Sea being number 1 and Tokyo Disneyland being number 2). Judging by the wait times in Anaheim however, I may be one of the rare few that feel this way.