Trying to get this post in before the year ends because as usual, life has gotten the better of me and I haven’t been the best at posting. About a month ago, Tdy and I went to California and did a road trip from LA to San Francisco. We were incredibly fortunate to have experienced the beautiful sites the Pacific Coast Highway offered and got to eat some pretty good grub along the way. Most importantly, we were lucky to have also missed the outbreak of the fires in Ventura, which we passed by on our way to San Francisco.

We took the SIN-ICN-LAX flight into Los Angeles International. We picked up our car at the Hertz centre off site from LAX with no huge issues – pro tip: sign up for gold membership (it’s free!) before making your booking. Makes picking up the car super seamless.

I’m going to be writing about this trip in chronological order so it’ll be easier to track the direction in which we are travelling. This first part deals with:

My favourite city this trip has got to be Santa Monica! Free parking for the first 1.5 hours, easy walkable distance to shops and the beach, and generally, a beautiful, quaint beach-side city. Truly could not ask for more. Prior to driving down to Anaheim, we had lunch at a really good local institution in Santa Monica – Gjelina (pronounced “Jelina“).

We shared a chorizo pizza – housemade chorizo, tomato, cream, fennel, basil and chili and a braised spigarello with crispy guanciale, confit leeks and calabrian chilli. Both were excellent. Gjelina’s vegetable menu is one of the most extensive we would see all trip and I would most definitely return to try more things. Everything on the menu sounded interesting, and unlike anything we’d get from a casual bistro here in Singapore.

My birthday was spent in Disneyland, and Teddy (with Liv, my cousin) had specially arranged for a surprise birthday dinner for me at Napa Rose – which I plan to write as a separate Disneyland entry.

The day we returned to LA from Anaheim, we stopped by Huntington Beach and Seal Beach, both of which were absolutely gorgeous – clear blue cloudless skies and lots of palm trees (see above), the only thing was was missing was a hammock and a coconut, really.

We got into LA around noon and set off to Sqirl for lunch (Tess had insisted it was extremely innovative – it was). At 1 pm on Friday, there was a line outside the door at Sqirl – no joke. We got the sorrel pesto rice with the works, and a long-cooked chicken and rice porridge as well as a persimmon scone with house-made jam to share. 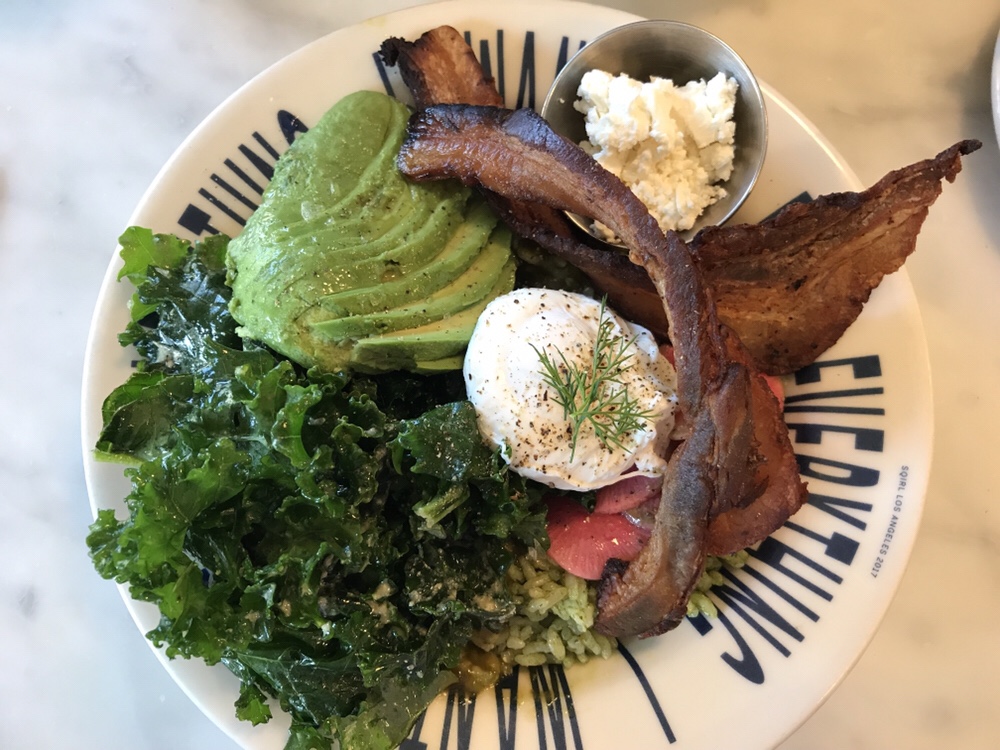 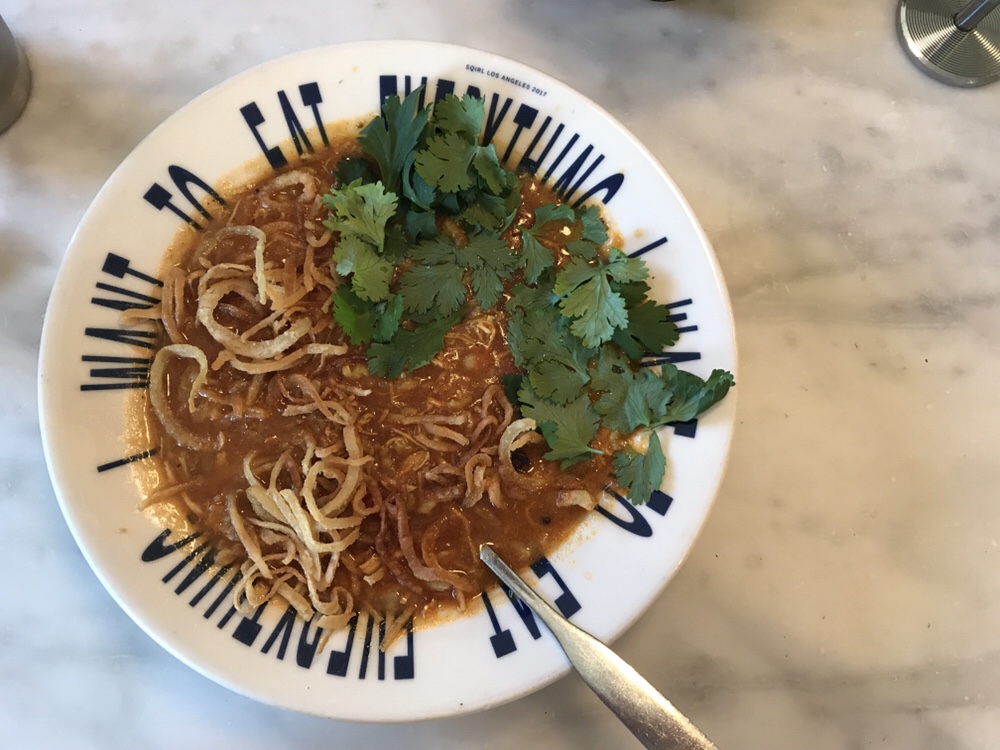 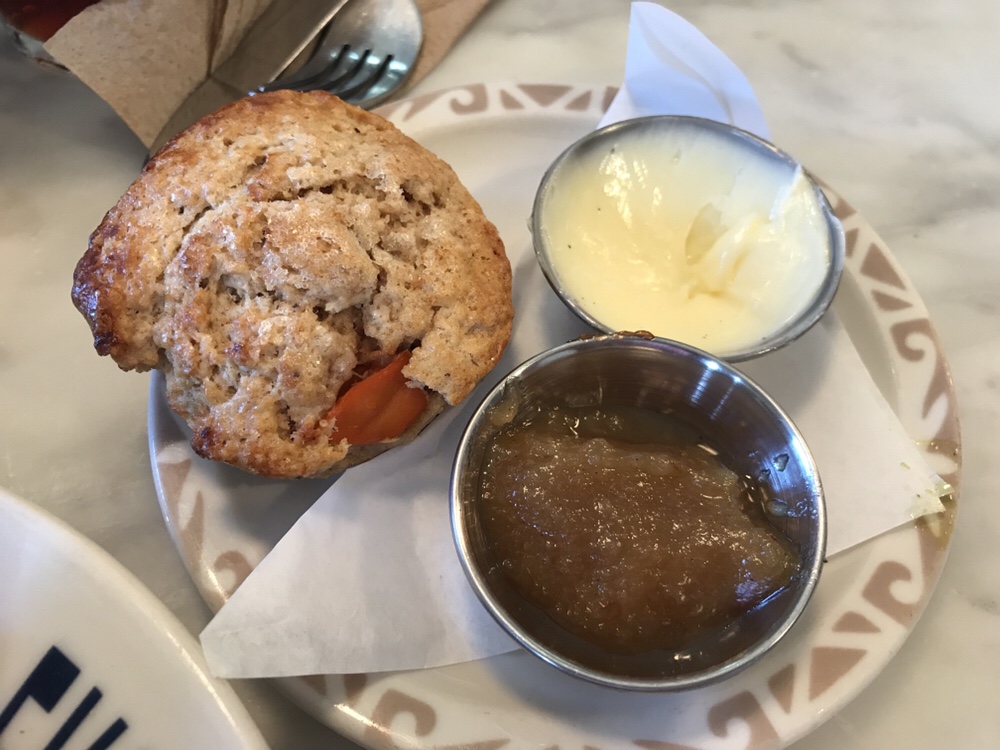 I’ve never tasted anything quite like the sorrel pesto rice. It really is quite delicious and it grows on you. The add ons really made the dish pretty epic – the avocado added some creaminess and cut through the tang of the kale, the bacon made for more texturally fun eating and the egg added a lot of flavour. My favourite on the plate were the pickles, which are usually too sour for me but this was not overly crunchy or sour and helped to balance the flavours on the plate. The chicken porridge was reminiscient of a Malay-style chicken soup with rice porridge, so while it was bold on flavour, it really wasn’t very special for me because it was easily found at home in sunny Singapore. Would recommend the persimmon scone with jam though (it was also great without)! It’s the perfect end to the meal, and I loved that it was not too dry.

We visited one of the nicest outdoor malls around – the Americana at Glendale – and it was all decked out in its Christmas finest. Really could feel the festivity in the air right there, and the fact that I was on vacation truly sank in there… We headed for the Griffith Observatory and the Angel’s stairway on a La La Land tour (it’s one of Tdy’s favourite movies!) after. Watching the sunset at Griffith was pretty magical, and brings new meaning to the term paddle pop skies. Definitely don’t miss out on the Griffith – the sunset and the exhibits inside. I will definitely return to explore the Griffith again. 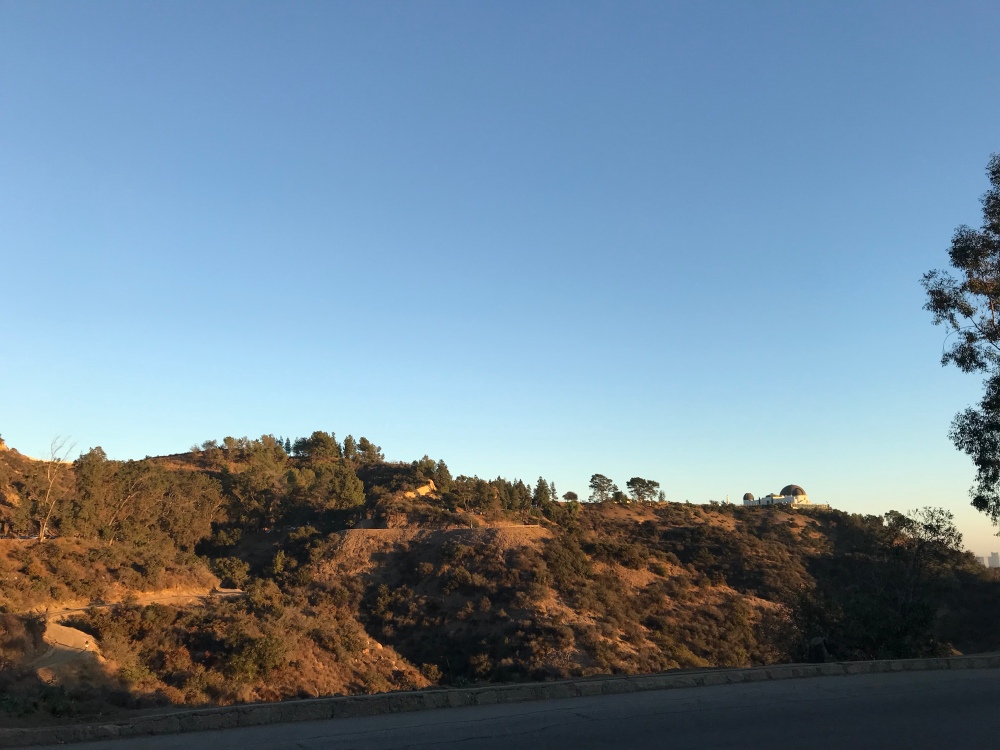 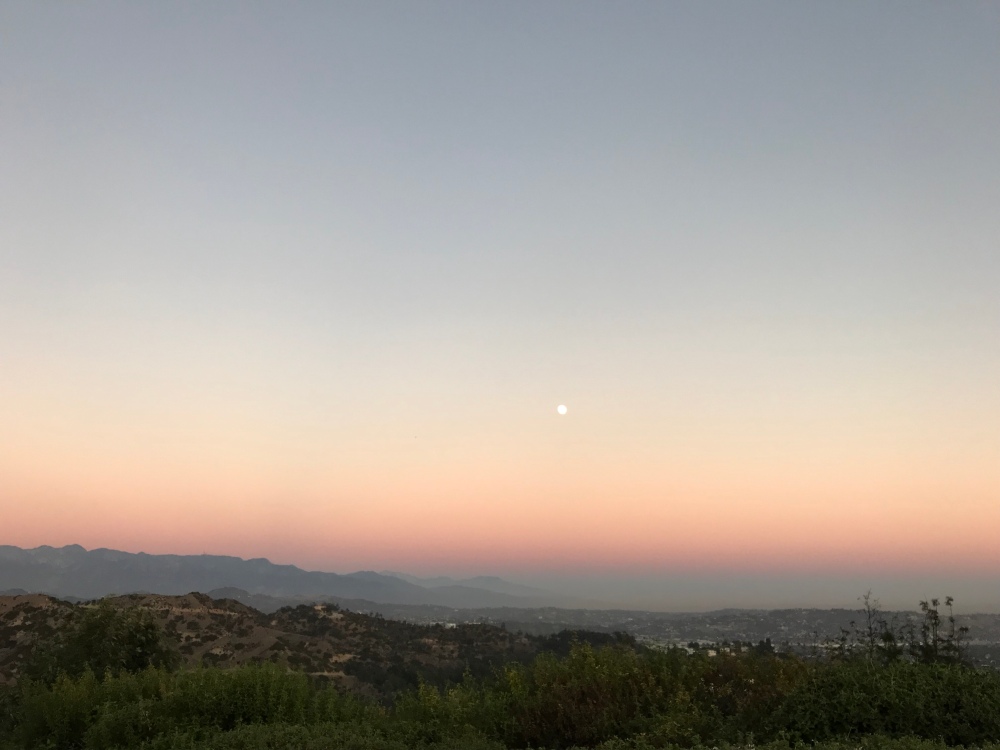 We then adjourned for dinner with Liv. I had booked Bestia about 2 months in advance, and when we arrived, it was completely PACKED. Bestia is located in the gentrifying arts/theatre district in DTLA (hope I got this right!) and I would recommend paying $8 for valet parking as the surroundings are a bit sketchy with very little street lighting. 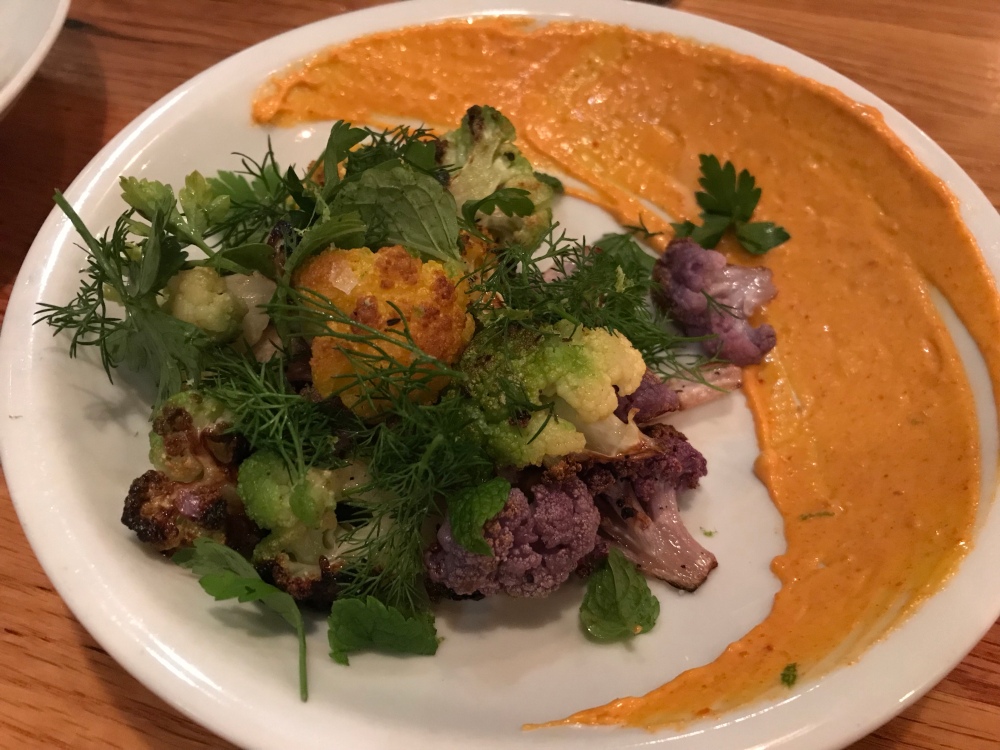 Everything at Bestia was good, but not everything was great – my favourite dish that night was the roasted heirloom cauliflower with smoked paprika aioli, dill, mint and lime zest. Other than being presented so beautifully, it was an excellent veggie dish that we didn’t find anywhere else on the trip. This was reminiscent, just vaguely, of Sin Lee Foods’ roasted broccoli. We were given the tortellini di mortadella (brown butter, lentils, spinach, pistachios and fresh thyme) on the house as we had to wait a while longer for our spaghetti rustichella (dungeness crab, citrus, calabrian chili, thai basil, onion seed) and the tortellini ended up second favourite dish of the night – I’m a massive brown butter fan. But I should stop rambling, because I think the pictures show for themselves how bloody amazing the meal was.

We left LA the next day. Before we left, we ate at Huckleberry, a fave spot of my Aunt E and Liv. We got in just before 10am, and managed to snag the last seat in the house. Free parking out back as well, so don’t feed the meter! 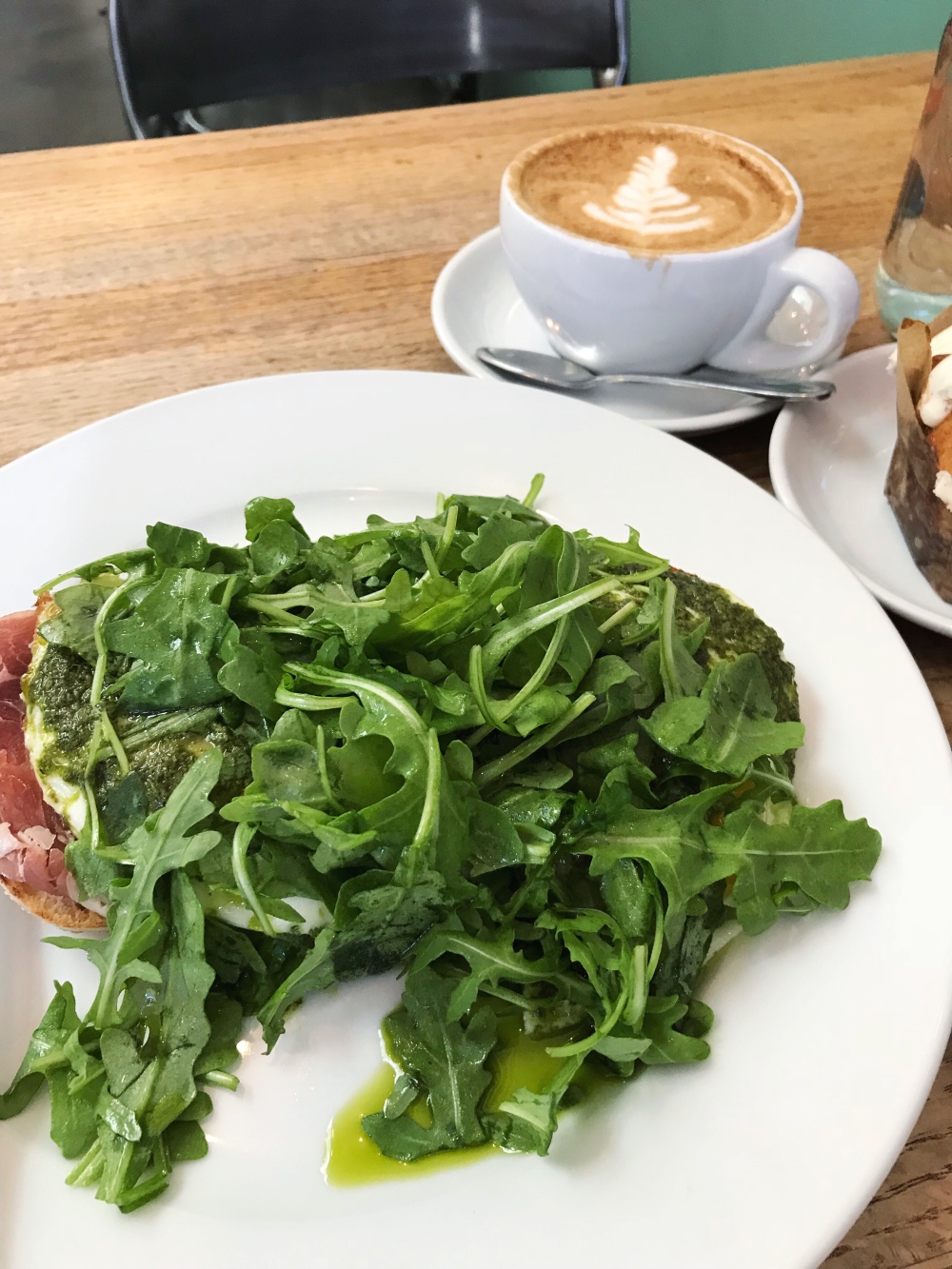 We got the green eggs and ham, which is two fried eggs with house made pesto and lots of rocket – the house made pesto was excellent, and had no cheesy aftertaste which I absolutely abhor, and the rocket just covered the entire plate. A really neat way to eat your greens. We also got a kouign amann cup and monkey bread to share. The kouign amann cup was buttery and flaky and just had the right amount of blueberry jam. It was a real treat and was a good size. There’s a normal sized kouign amann but it would have been too much for breakfast. The monkey bread was just alright, but I liked the one I had at Stanford better.

And… it’s goodbye to LA and Santa Monica for now. I’m convinced that Santa Monica is where food dreams come true, and the next few cities on the trip would have a lot to live up to.