Alright, it’s been more than a year, and what a difference a year makes. So what inspired this – basically ET asked me to update and today Trish asked me about Melbourne AND about Tummytay in lecture and during lunch. So why not? And also, I feel like I may never have such satisfying meals for a while since almost every meal was an epic meal in Melbourne and Sydney.

Plus it helps that I have to watch a video in preparation for mediation tomorrow. Obviously I should write a hugeass long post about food instead of preparing for it.. #priorities.

Without further ado, I present:

MUST EATS IN MELBOURNE

1) Coconut-Pandan gelato at Spring Street Grocer
And I thought I tasted the mother of all gelatos in Italy. I was wrong. Completely and utterly wrong. This was *magical*, the pandan and coconut were like pb & jam, yknow? THEY GO SO WELL TOGETHER. Like Britney and Justin. (They are still my OTP. Do not judge.) It was incredibly smooth, with NO ICE CRYSTALS AT ALL – don’t you hate icecream that is icy? AND IT IS SO HARD TO ACHIEVE THAT FEAT. Gelatos for the win. Who needs iceream or any other gelato flavour anyway? This gelato spoilt the market for the other gelatos I had in Melbourne, and none of the others I tried even came close to this. Not even the famous Messina.

2) Fried Brioche at The Hardware Societe 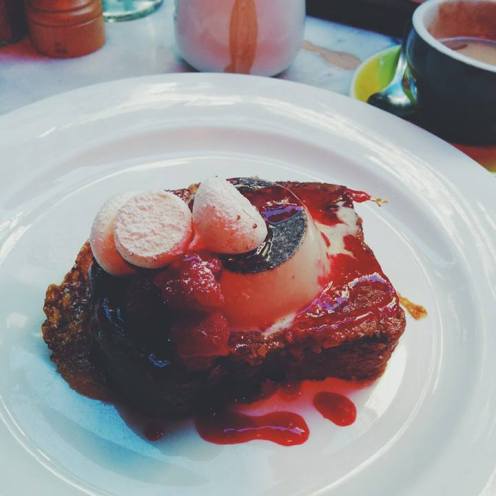 I think I loved this mainly because it was an infusion of all the flavours I enjoyed – rosewater/earl grey panna cotta/fresh raspberries – that reminded me of Pierre Herme’s famous ispahan. Prior to visiting Melbourne I had heard so much about THS (OMG SAME INITIALS AS ME?????) and I was not disappointed at all. The portions are huge, and because the flavours are quite complex, and the brioche is fried, it does get a bit heavy. But no problemo, it just means that you have to eat two dishes so as to alternate between that and the fried brioche. Which brings me to….

This was beautiful. I love baked eggs but I find sometimes the problem with brunch food/eggs is that I can easily replicate it at home. NOT THIS I CAN’T. three baked eggs sitting pretty in a pot full of warm tomato stew, silvered almonds and hidden spinach at the bottom. This really warmed us up on a blustery winter morning.

One thing I really missed about western nations: their sandwiches. Alright, banh mi is asian… but wowowow. Perhaps it was because Nick and I were RAVENOUS after trekking half of the CBD to get here (so much for me saying “it’s really nearby”. No one should ever trust my direction sense. More to come later). The baguettes were crisp and provided a REALLY satisfying crunch when we bit into em. I also enjoy pickled vegetables so this sandwich really ticked the right boxes for me. The best part: $6.95 for each banh mi. SAY WHAT???? It also stays fresh for a long time because I brought half a banh mi onto the plane home. It was still as great 6 hours later. Dammit sometimes I wish Willy Wonka’s TV were real then I’d be able to reach through my screen and grab whatever food I want and EAT IT.

Hammer & Tong’s logo is reminiscent of the CCCP for some reason (Communist Party), and that’s another reason why I like it. The soft shell crab burger has been talked about so much by the online food community (thank you urbanspoon.) that I think one of the stupidiest decisions I made in Melbourne was to share the burger with Nick. It should not be shared. Period. CRISP SOFT SHELL CRAB, PILLOWY BRIOCHE, and forgettable greens. It was also very light!!! Deepfrying a soft shell crab is not that easy ok??? Alright, maybe the Bill Murray at Lucky Chip has a greater wow factor (hellooooo wasabi mayo + secret sauce, how not to win!?) BUT THIS WAS A GREAT BURGER ON ITS OWN MERIT. Tummytay approves.

5) Original beef burger with the works at Andrew’s Hamburgers

RLY ANNOYED BECAUSE I WAS SO FULL SO I COULDN’T FINISH MY HALF. Any burger with bacon and egg is also a winner in my books. And honestly? Andrew’s is better than The Royale Brothers whom we made the trek out to Middle Brighton to search out. Don’t know how to describe just how awesome (see, running out of adjectives) this burger is, so please just look above for the gorgeous cross section. Dammit why aren’t burgers this accessible in Singapore? WHY? (Answer: we don’t grow our own cows, that’s why.) 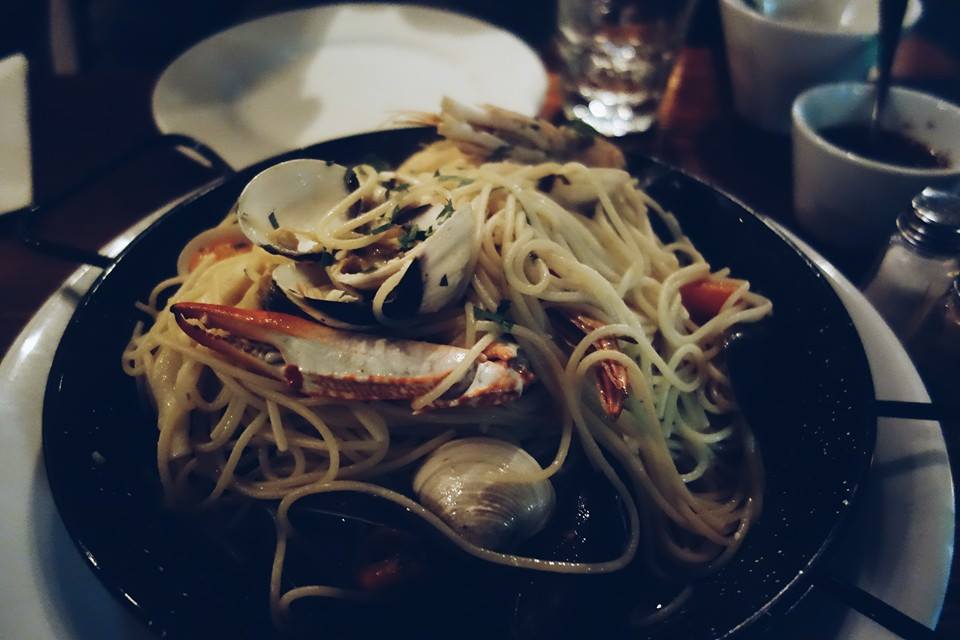 No trip to Melbourne is complete without a trip to Lygon Street, even though food has been said to be a hit and miss, cos yknow as places become touristy, food standards just plummet ): But!!! THIS! WAS! SO! WOW! Alright, so the Scoglio was a bit dry for my liking and I felt there should have been a bit more white wine – yes yes I know the irony of this statement considering how alcohol and I are not friends – so as to create a nice vongole type sauce. But hey, I’m not the italian so.. ohwel. Other than it being a bitttt too dry (not ‘moist’ enough. HAHAHAHAHAHAHAHA) it was A GREAT HEARTY DISH OF CARBS AND SEAFOOD IN A HUGE PAN. I would highly recommend this dish; it is pasta done simply and done well. The lobster tail tagliatelle was also for two, but there was a creamy sauce instead, just right to coat the pasta without it being too cloying. We loved it. Maybe a bit more than the Scoglio… but just a tiny bit.

7) HONOURABLE MENTION: Vegie Bar (no pictures though. OOPS.)
Vegie Bar is the kind of place I think Adele and I would frequent if we lived in Melbourne. It is completely vegetarian but in Singapore there tends to be this stereotype that vegetarian food = tasteless rabbit food and that there is a sense of being ripped off paying the same price for a dish that has no meat. I regret not taking pictures of the wonderful place but its menu is quirky and innovative, and EVERYTHING SOUNDED YUMMY – baked mushroom with quinoa!! vermicelli and soba salads, omg. The serving plates were also bigger than my face. Though the interior was dark, and lighting was a bit sleep inducing, I enjoyed the bar concept of it (neon lights! YAY!) and how they have managed to make vegetarian food cool. 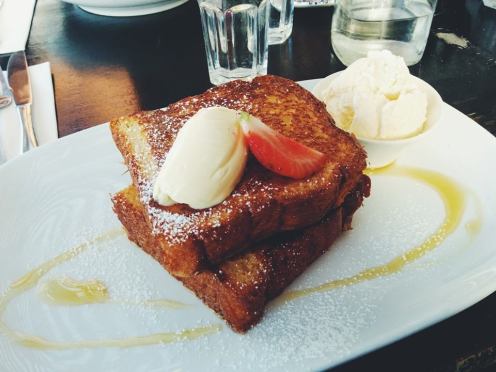 So there was this day we were supposed to meet Ray at this lovely brunch spot in the middle of nowhere (HPSTR ALERT!), called Mart 130. Mart because it’s tram spelled backwards and it is literally right at the tram stop. Like when we stepped off the tram, crossed the tram tracks – I LOVE CROSSING TRAM TRACKS. “You are waiting for a train…” (DOES ANYONE GET THIS REFERENCE) – and there it stands, on the other side of the platform. Alright, silly me didn’t think to capture a picture of it on a digital medium – I have it in film. I think everyone should pay this a visit, I have never seen anything like it before. Just don’t make the same mistake as me and take the tram in the wrong direction (THE TRAM IS NOT TOWARDS EAST BRUNSWICK.) only to realise that we’ve gone in the wrong direction at the tram’s second last stop. #winner

Another thing I really enjoyed about Melbourne was the availability of great coffee. I love how serious the coffee culture is and as much as I try to pretend I’m into the whole thing, I only describe coffee as whether it is ‘gao’ enough. The best part is waking up at 10ish everyday and making a pilgrimage to a new coffee spot while Nick sleeps in (what a pig.). I enjoy the peace and quiet that comes with sitting at a coffee joint alone with my coffee and kindle. It is quite a thing to be in a city but yet be able to stay grounded and not lose yourself in it. I love it. My favourite coffee spot was a little bird told me… possibly because it was the nearest to us (ha!!) but also of it’s non-cramped space and open interiors. Brother Baba Budan‘s interior decor was incredibly quirky – a ceiling full of chairs!! but it was a bit dark for and cramped for my liking. Maybe now Singaporean hipsters will be inspired to adorn their cafes with chairs instead of just BICYCLES. Bicycles are so 2012.