So I’m very lucky to be able to eat some good food on the plane this time round again. And yes, I don’t really get to enjoy it all the time, so I’m counting my blessings that I can take pictures of such yummy food and put them on tummytay for all my loyal readers HAHAHA. Singapore is awesome, I love hot weather more than cold weather, so the weather here suits me just fine. The first meal that I had when I came back was….. truffle fries at PS Cafe with Nat & Jac. Ok, ramblings aside, pictures and foooooooooooood!!!

Refreshment from Manchester to Munich: 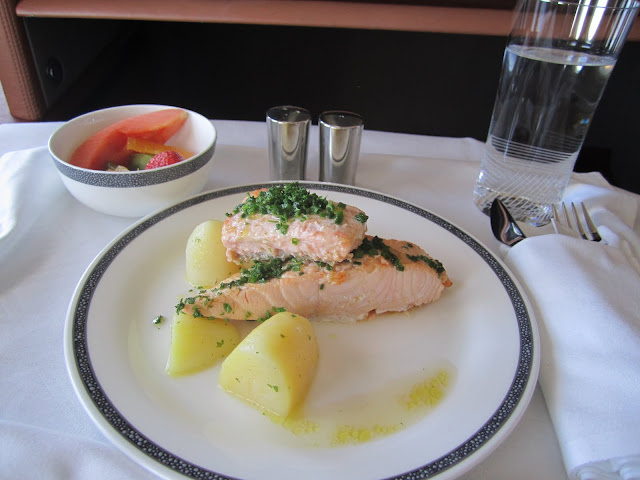 Baby papaya with kiwi, orange and strawberry
Pan seared salmon escalope, seasonal greens and potato with olive oil dressing
My other option was focaccia with roasted chicken and smoked mozzarella, seared tomato and basil pesto. Thinking about it now maybe I should’ve gone for the focaccia. Cos when the salmon was first served my first reaction was ‘zomg hall dinner’. But honestly, the salmon was done well, the lemon juice that was added really brought out the flavour of the fish. The potatoes were not the starchy kind that is eaten all the time in the UK. But the highlight of my meal was the fruit bowl. I think I really began to appreciate tropical fruits so much more while studying in the UK, cos maybe I hardly eat them, but whenever I buy berries they’re always fresh and sweet and bursting with juice 🙂

Lunch from Munich to Singapore: 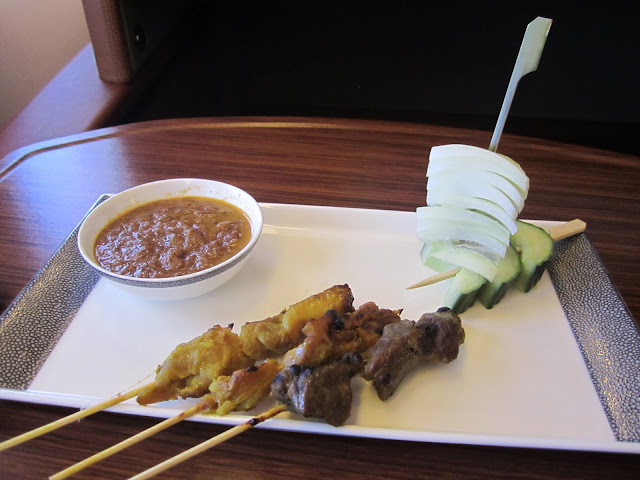 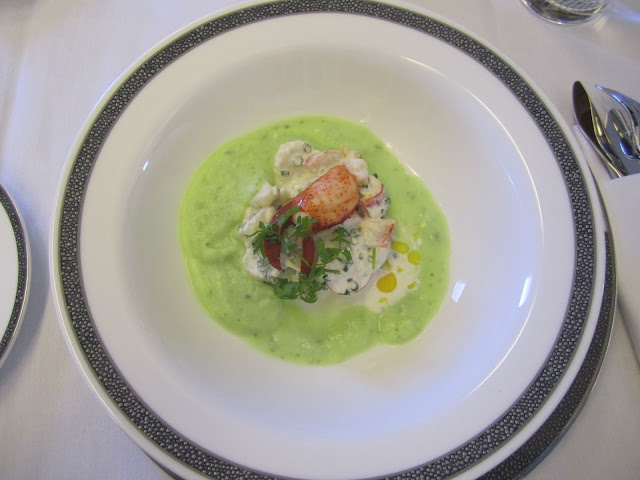 Salad of poached lobster with potato and watercress vichyssoise
THIS WAS MINDBLOWINGLY GOOD. Look, I know the green stuff looks dubious, but it’s such an eclectic mix of potato and I-don’t-know-what and it goes so well with the lobster omg. But then again, the lobster itself was already so sweet, I couldn’t decide if I wanted to eat it with the watercress vichyssoise. Omg it was such a good mix and balance of sweet and savoury and I wish they gave me more lobster I could eat this as a main IT’S SO GOOOOOOD. SIA always does lobster very well I’ve come to realise!!!! And this was a dish concocted by Gordon Ramsay specially for SIA, I think. I cannot emphasise how the flavour explodes full on into your mouth – I would rate it as one of the best dishes I’ve eaten, on par with the first time I ate pan seared foie gras at White Rabbit. Anyway, vichyssoise is ‘a thick soup made of puréed leeks, onions, potatoes, cream, and chicken stock. It is traditionally served cold, but can also be eaten hot’. Thank you Wikipedia for the definition. 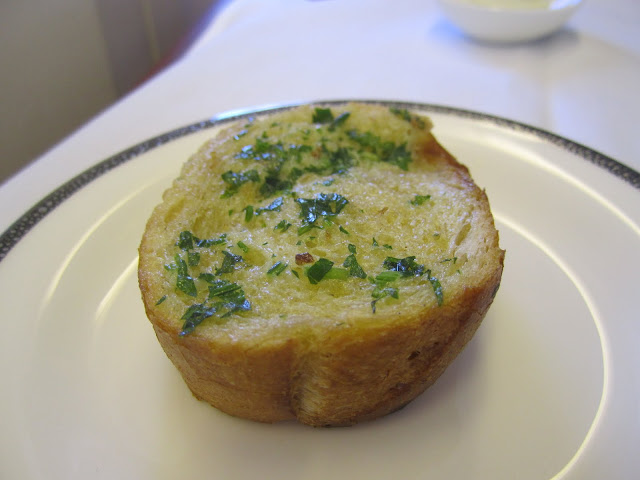 Garlic bread
I ALWAYS choose the garlic bread over any other bread roll. There is this pretzel thingy in the bread basket that I’ve always wanted to try but never did. Maybe next time….. if there is a next time. 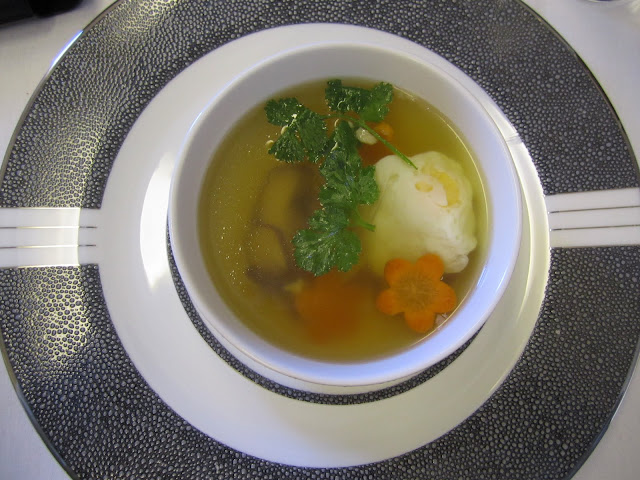 Oriental chicken soup with quail egg and mixed vegetables
Another thing SIA does right: chinese soups. This is clear soup that is full on flavour. The ingredients don’t distract you from the soup itself and make solid accompaniments to the soup. Yummy. 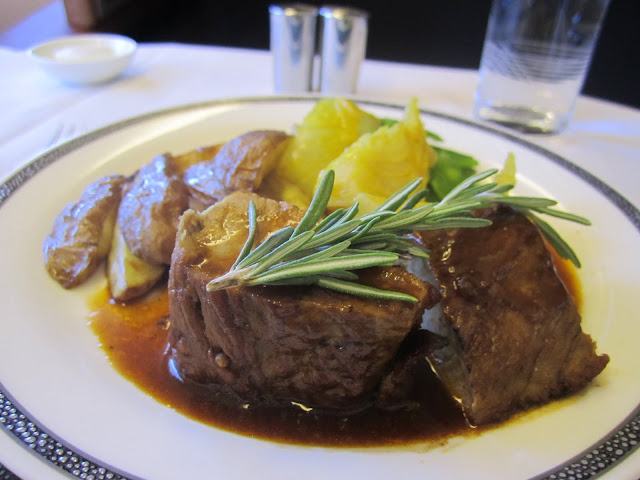 Pork loin in Grand Mariner sauce with roasted vegetables and sauteed potatoes
Meats are hard to do well on the plane methinks, because it’d either be tough or dry, or both. And this was a bit dry, but the meat was not as tough as I expected it to be. The Grand Mariner sauce was actually quite sweet! And it went well with the pork, though it wasn’t spectacular. I didn’t like the roasted vegetables at all, and barely touched them. While clearing my plate I was hoping that the air stewardess didn’t think that I was a spoilt brat who didn’t eat my vegetables cos I skipped salad too (I didn’t want to look like an even bigger pig by ordering every single course) 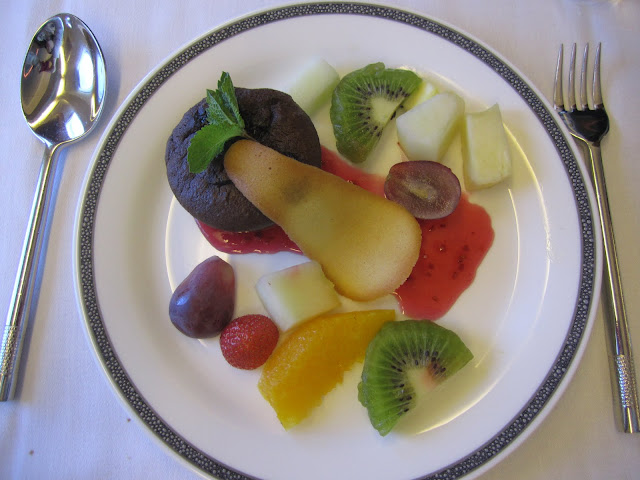 Warmed chocolate cake with raspberry sauce, tropical fruit salad and tulle
Arrrgh my chocolate cake wasn’t warm enough but it was good, as always, just like the chocolate cake in this entry. I think it’s the same cake! Anyway I liked my dessert, cake and fruits; made me feel healthy 😀 The colours just make you happy, no? And the raspberry sauce was tart, so the dessert wasn’t too sweet. It was a pretty good end to lunch. Though I think that the lobster set the standards really, really high for the other dishes.

Breakfast from Manchester to Munich: 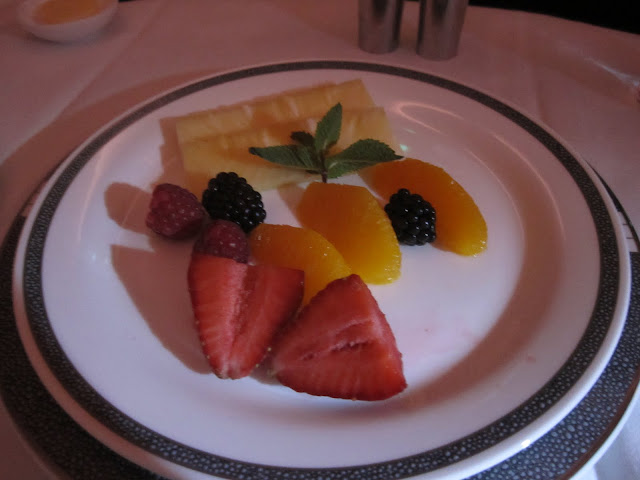 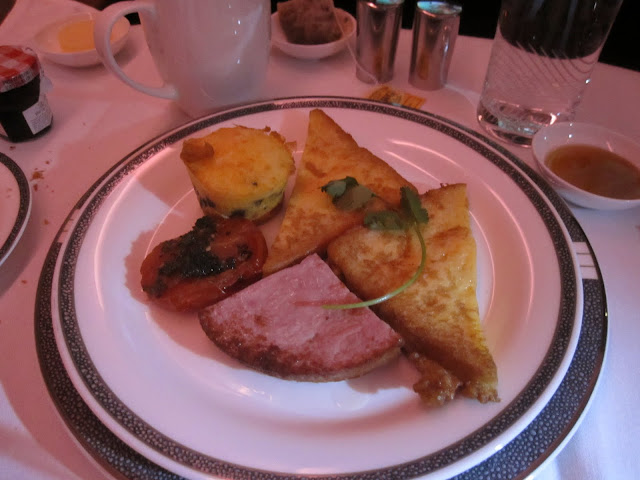 French toast with maple syrup, gammon ham, frittata and roasted tomato
Ok so I was a bit disappointed that I didn’t get my bee hoon soup because.. there weren’t any left. But it’s okay! Time to try something new! Between the spiced pork sausages, french toast and the fresh eggs prepared on board, I went for the french toast cos the other two reminded me of hall breakfasts heh. Anyway the french toast was a good choice, because it’s something I haven’t eaten in a while, and I LOVE MAPLE SYRUP. So maple syrup + french toast = great breakfast. The gammon ham was yummy too! Not too salty and really happy that it wasn’t the thin sort of ham you get in supermarkets 🙂 The roasted tomato was good stuff. I had a croissant with blueberry jam on the side which I didn’t manage to finish but what I love most about the breakfast pastry basket is the little jars of jam that they provide on the side – choice of strawberry, marmalade, honey, etc. The croissant isn’t amazing but the blueberry jam + croissant was yummy! Maybe I should switch to blueberry jam in the future instead of strawberry jam… hmmm… Oh man writing about this makes me want to eat some french toast with maple syrup now 😦 😦 and I kind of want to watch Nikita (was eating breakfast and watching Nikita at the same time).

Oh yes, sorry for the crappy breakfast photos I really didn’t want to use flash on board the plane and it was all dark outside. I should be updating tummytay with photos from Italy (food I mean, omg the foooood so good.) soon. I’m quite excited for that, but it’s a lot of work cos we ate SUCH GOOD FOOD. And had a mini gelato trail. And yes, if you were wondering, I am fatter now. Nnnnnngh so hungry 😦