I really have to get a move on all the backlogs that I’ve chalked up before I went to Italy before I even start on all the Italian food which is -omg-. Yeah, no single adjective can describe how awesome the food in Italy is.. safe to say I had some pretty memorable meals in Italy. Anyway before I left for Italy I rounded up a couple of people to go to Ocean Tr235ure with, having heard so much good things about it, notably Mabel and Genia’s ravings about the duck. Anyway thanks to Max & Calvin who came down to try Ocean Treasure (not going to type ‘Tr235ure’ because it’s too much work) during their exam period!!!

Samsui Chicken: Cannot beat the one at Soup Restaurant back in Singapore. The garlic accompaniment was good, but the dish is forgettable. We had to order a chicken dish that wasn’t spicy so we ordered this. Well, the cooking is not bad but overall this dish just isn’t that amazing.

Beef with Yam: If you don’t like yam, you shouldn’t order this for sure. Surprisingly, the yam gives the beef another dimension of flavour. Like, I never thought yam could work with beef, but this dish really grew on me. At the end of the meal I thought it was worth ordering again, it was not bad! 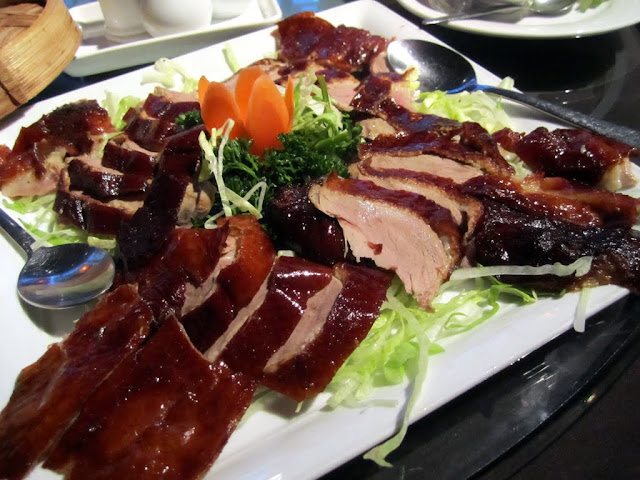 Roasted duck, Peking style: I LOVE DUCK PANCAKES! Okay the duck here is pretty good I guess, but I’m not any duck connoisseur so I can’t really tell. The duck silvers were tender and well done. I think someone commented that we should have tried the crispy duck instead of this original style 😦 Nevertheless, the duck was good. I guess I kind of expected more from all the ravings I’ve been hearing. Still, this is good stuff. 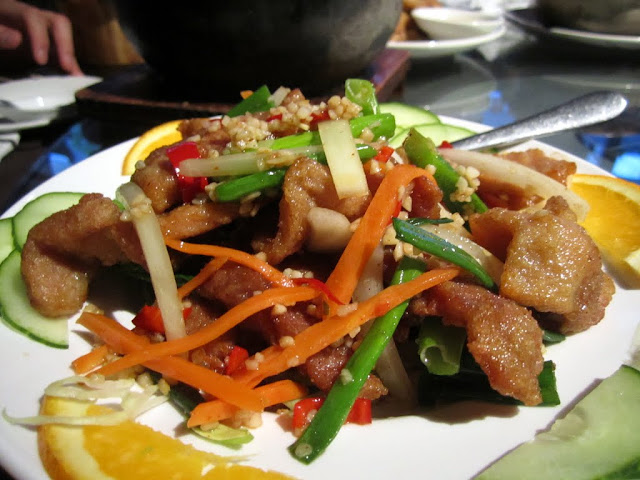 Salt and Pepper Pork: This was a surprise! I was amazed the pork wasn’t chewy, was kind of expecting it to be. Instead of slabs of pork, they cut it into thin slices so that it isn’t too tough. The mixed vegetable medley that was stir-fried with the pork really gave this dish a visual impact, and was also what made this dish perfectly balanced. Love this! 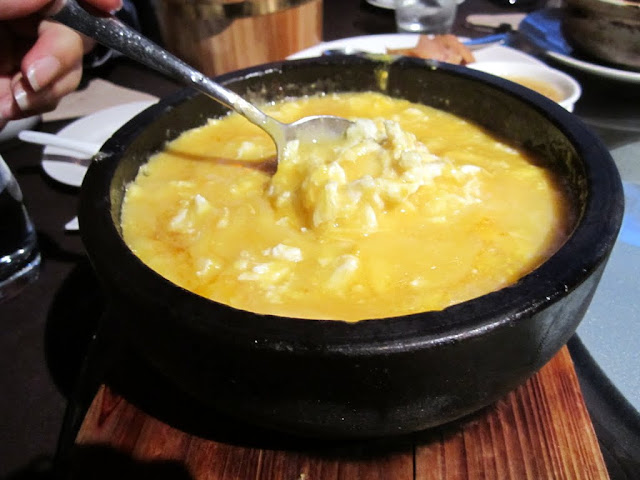 Tofu in Salted Egg Yolk: This was the star of the day. Don’t judge a dish by its looks man. This dish is just mindblowing. And it’s so simple! Just salted egg yolk and tofu. We drenched our rice in the salted egg yolk and it was so, so, so good. It’s not even that salty, that’s the best part. It was very light!! I could actually just eat plain rice with this dish. Omg okay getting really hungry thinking about it right now:(

For the 7 of us, it was a really good meal I think. I was pretty satisfied after that, but big eaters like Calvin Chia wasn’t 😦 Ocean Treasure is definitely pricier than most of the other Chinese restaurants here in Manchester and it’s easy to see why – the decor is way more posh than any other Chinese restaurant. It was a tad difficult to find, not being inside the AMC building itself but rather at the side entrance where the casino was. I was dress in a tank and havaianas and I felt a bit underdressed.. but it was 26 degrees that day! For 7 of us it cost way less than £15 per person, I can’t remember how much exactly. Service was prompt and efficient, with the wait staff being fluent in English, Mandarin and Cantonese. Before I left the manager d00d gave me a name card and suggested reservations in the future. I think I’d definitely be back here. I like the ambience and the food is really, not bad 🙂